We’re visiting wonderful people in each town along the north shore of Lake Atitlan, which can only be reached by water taxis. Starting in the west, we went from Santiago to San Pedro on Wednesday, where we received fabulous deep-tissue acupressure healing massages from Angela. I love massages, and try and get them as often as possible, but this may have been the best ever. While Dona and I were respectively waiting our turns, we spent a few hours hanging out in the garden with Angela’s husband Eric, and a few of their friends who dropped by. From Deadheads to former business executives, each of these folks had a remarkable back story of what they used to do, and how they came to Lake Atitlan. 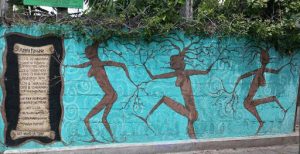 Felix met us at Angela’s and accompanied us on the boat to San Marcos, a lovely little town where we met other ex-pat friends and had great conversations in charming little open-air restaurants. It reminded me of the ex-pat community of artists, poets and literati in Paris in the 1920s. Felix had told us on the boat that San Marcos was the “Amsterdam” of Lake Atitlan, and that the synchronicity factor here was off the chart. Sure enough, as we walked by the Restaurante Fe we ran into Deva Nirguna just coming out. So we decided to eat there. The food was fabulous! Shortly John and Esther showed up and joined us. None of this had been previously arranged. Felix said this happens all the time here. Truly the place could be called Synchroni-City!

San Marcos has become a magnet for global seekers, who believe the place has a spiritual energy that’s conducive to learning and practicing meditation, holistic therapies, massages, reiki, and other spiritually-oriented activities. … It’s an outlandish mélange of cultures—evangelical Christians, self-styled shamans, Kaqchiquel farmers and visionary artists—against a background of incredible natural beauty. Someone ought to make a movie about it.

Felix put us up in a cottage he’s house-sitting. Apparently this sort of arrangement is common, as many people have built charming little summer homes around here which they only visit occasionally. Today we had a lovely luncheon visit with Esther at her house, all beautifully landscaped with gardens and rock walls, as is so much here. Baba John came by to show off his brand-new tattoo on his forearm of my Astra, Star Goddess jewelry design that he fell in love with at the workshop! #whereisastra 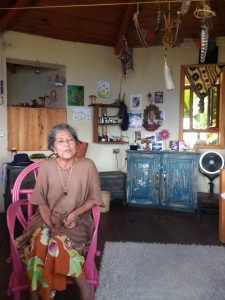 Esther at her home in San Marcos. 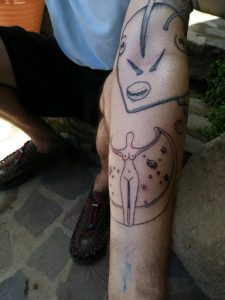