On February 27, 2017, SpaceX made the following announcement:

SpaceX to Send Privately Crewed Dragon Spacecraft Beyond the Moon Next Year http://www.spacex.com/news/2017/02/27/spacex-send-privately-crewed-dragon-spacecraft-beyond-moon-next-year We are excited to announce that SpaceX has been approached to fly two private citizens on a trip around the moon late next year. … Other flight teams have also expressed strong interest and we expect more to follow. … NASA’s Commercial Crew Program, which provided most of the funding for Dragon 2 development, is a key enabler for this mission.

In 1954, the Science-Fiction Book Club (a division of the Doubleday Book Club) issued “Moon Tour
Reservation” tickets as a promotion. The ticket states that the holder’s “name and address is being held on file in Science-Fiction Book Club archives,” and “will be turned over to the first company making commercial moon voyages.” The bearer is instructed to “present this card to the Moon-Tour Reservations Clerk” after the “official announcement of voyages” has been made. That “official announcement” was made by SpaceX on Feb. 27, 2017. I have managed to hold onto this ticket for 65 years! 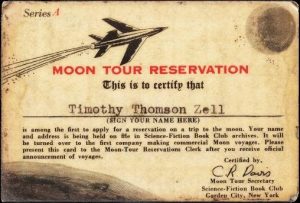 For 62 years, I’ve held onto my certified “Moon Tour Reservation” card, issued by the Science-Fiction
Book Club in 1954, when I was 11 years old. At that time, my parents thought I was crazy for believing
that humans would ever fly to the moon! But my faith was vindicated on July 20, 1969, when Neil
Armstrong and Buzz Aldrin landed the Eagle module on the Lunar surface. Sadly, after only five more
Lunar landings, further manned explorations of the moon—and any other manned deep space
voyages—were terminated after 1972. Now Elon Musk of SpaceX has announced a return to the
moon—carrying commercial passengers on a circumlunar voyage. And after waiting 62 years, I’m ready to redeem my reservation with SpaceX!

But despite SpaceX’s announcement of pending commercial moon voyages, and the SciFi Book Club’s promise that my “name and address is being held on file in Science-Fiction Book Club archives,” and “will be turned over to the first company making commercial moon voyages,” I received no response to my letters from either Elon Musk or the SciFi Book club. I sent follow-up letters on Sept. 18, 2018, but still nothing. It’s now been 65 years, and I’m still waiting.

Now, on March 2, 2021—just three years after SpaceX’s original announcement of pending commercial moon voyages, Japanese billionaire Yusaku Maezawa has announced that his dearMoon project, which aims to fly the “first civilian mission to the moon,” is now looking for eight crewmembers to fly to and around the moon and back on SpaceX’s Starship spacecraft: https://www.space.com/yusaku-maezawa-dearmoon-contest-seeking-crewmembers?utm

The project was first announced in 2018, with the original intent to bring a crew of artists to the moon. In this latest release, Maezawa calls for applicants to make up a crew of eight individuals from around the world for the week-long lunar trip. I have applied to be a member of that “crew of artists.” Will I finally be able to redeem my ticket? Stay tuned! 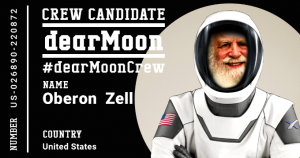