After another night at Felix’s place, we had only coffee in the morning at the Moonfish café, as Friday evening we were scheduled for an ayahuasca ceremony with Jam. We took a boat with Felix to Santa Cruz (the “Santa Cruz” of the Lake…), where Jam met us at the famous dock restaurant and scuba dive shop, La Iguana Perdida (the lost iguana). The map painting included the famous Atitlan lake monster, Xocomil. 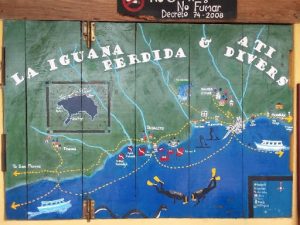 We took a long hike up the mountain through the jungle to a remote ceremonial temple/site where Jam led us in an awesome ayahuasca ceremony, in which Jam and Felix kept up a joyous and haunting musical background of voices, singing bowls and didgeridoo. Jam’s knowledge and skill as a medicine wizard was most impressive, establishing an atmosphere of perfect love and perfect trust. Dona tripped on Psilocybe cubensis mushrooms, and had beautiful happy visions of lights, colors and forms she could only describe as “psychedelic.” Felix said she was like “a fluffy koala.” My own experience was perhaps a bit odd, as I spent the entire trip immersed in a vision of composing and writing epic love stories from myth and history, trying to get the wording just right to convey the deep continuity of Love through the ages, and how it shapes our lives, cultures, and Destiny…to this very moment—and beyond. 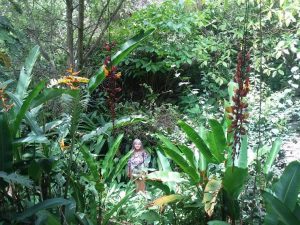 A flower in the forest. Dona in the jungle.

Ayahuasca is an entheogenic brew made out of Banisteriopsis caapi vine and other ingredients. The brew is used as a traditional spiritual medicine in ceremonies among the indigenous peoples of the Amazon basin.

In the 16th century, Christian missionaries from Spain and Portugal first encountered indigenous South Americans using ayahuasca; their earliest reports described it as “the work of the devil.” In the 20th century, the active chemical constituent of B. caapi was named telepathine, but it was found to be identical to a chemical already isolated from Peganum harmala and was given the name harmine.

Some Westerners have teamed up with shamans in the Amazon rainforest regions, forming ayahuasca healing retreats that claim to be able to cure mental and physical illness and allow communication with the spirit world.

Hallucinogenic species of the Psilocybe genus have a history of use among the native peoples of Mesoamerica for religious communion, divination, and healing, from pre-Columbian times to the present day. Mushroom stones and motifs have been found in Guatemala. A statuette dating from ca. 200 CE. and depicting a mushroom strongly resembling Psilocybe mexicana was found in a chamber tomb in the state of Colima. A Psilocybe species was known to the Aztecs as teōnanācatl (“divine mushroom”). Aztecs and Mazatecs referred to psilocybin mushrooms as genius mushrooms, divinatory mushrooms, and wondrous mushrooms.

After the Spanish conquest, Catholic missionaries campaigned against the cultural traditions of the [natives], dismissing them as idolaters, and the use of hallucinogenic plants and mushrooms, like other pre-Christian traditions, were quickly suppressed. The Spanish believed the mushroom allowed the Aztecs and others to communicate with devils. In converting people to Catholicism, the Spanish pushed for a switch from teonanácatl to the Catholic sacrament of the Eucharist. Despite this history, in some remote areas the use of teonanácatl has remained.