Last Monday, the 14th, we all went back into NOLA to see stuff we missed on our first visit. Most of the museums were closed, as we’ve discovered museums are all over the world on Mondays. But the old St Louis Cemetery #1 on Basin St. was open and offering tours, which we took. Fascinating! Because NOLA is at sea level, all the tombs are above ground, with many niches into which thin (now cardboard) caskets with bodies are shoved. After a year and a day, they are decomposed enough that another casket can be inserted, pushing the previous remains into a central well where they drop into a chamber below, to mix with centuries of other remains. This “receiving vault” is called a Caveau (Fr. “cellar”). 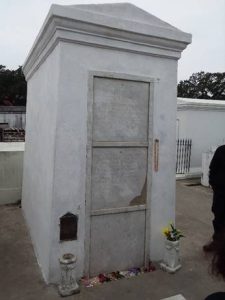 Of course we visited the tomb of Marie Laveau (“The Voodoo Queen of New Orleans”), where there are always fresh flowers. Her burial in 1881 was recorded as the 63rd of 84 remains in that tomb. We saw the pyramid tomb made for Nicolas Cage, and the big tomb with the Goddess statue where Peter Fonda tripped on acid (for real) in the 1969 movie, Easy Rider. 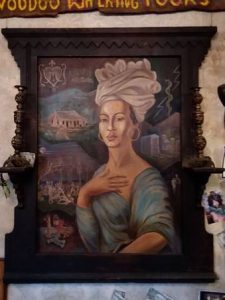 After leaving the cemetery, it seemed logical to visit the New Orleans Historic Voodoo Museum. A tiny museum in a shotgun apartment, its several rooms of displays were quite amazing and thorough, with numerous authentic working altars and artifacts. There was a lot of info on Voodoo Queen Marie Laveau, born in 1801. A femme de colour (“free woman of color”), she was famous as a traiteur (“healer”), specializing in love potions and spells. She was a notable humanitarian, adopting orphans, feeding the hungry, taking in the homeless, visiting prisoners, and curing people during the yellow fever epidemics. Her daughter— born in 1822 and named Marie Angelie—carried on as Marie Laveau II until her death in 1862. 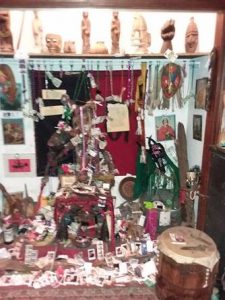 The gris-gris room exhibited the four categories of gris-gris (spells): 1) Love and sex; 2) Power and domination; 3) Fortune and luck; and 4) Uncrossing or undoing another gris-gris. A large painting of a Voodoo ritual featured a naked Queen (priestess) dancing “Le Grande Zombi” with a snake. And the final room encompassed several working altars, covered with photos, petitions and offerings. 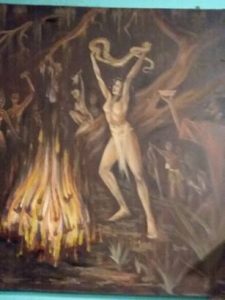 After the Voodoo museum, we all ate dinner at the New Orleans Creole Cookery, where I had a fabulous Creole sampler of shrimp creole, crawfish etouffee, gumbo, oysters Rockefeller and oysters Biennville.

Tuesday the 15th we drove in two trucks for an hour and a half to Jiva’s family farm near Magnolia, Mississippi, where she and Ty have lived for 25 years. On the way we stopped to eat at the famous Mike’s Catfish Inn in Amite, LA, with a fabulous salad bar. I had yummy fried oysters, which I love. The farm was such a homey place—but no Internet, so I was offline for a few days. 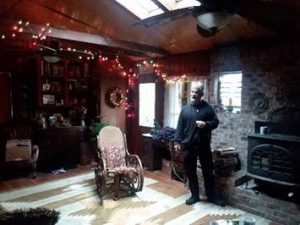 After a nice walk in the woods, a lovely salmon dinner, and great conversation around the fire, Dona and I spent the night. We needed to get up early in the morning to drive 7 hours back to her bus at the Texas Ren. Faire site near Magnolia, TX. Now that we’re here, for the past two days I’ve been trying to catch up with my emails and messages, and to write this…