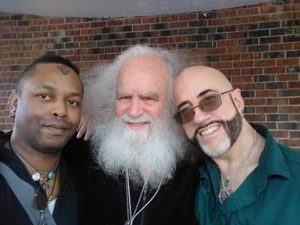 I left Orion and Sethlan Friday, and drove down to Alexandria, VA, to visit my old friends Burt & Stephanie Johns. Burt was with CAW back in the ‘90s, and is currently hosting a Heathen Kindred called Mannaheim. A few folks came over for the evening, and Stephanie prepared a fabulous dinner. We stayed up very late reminiscing on old times, Starwood Festivals at Brushwood, and what we’ve all been doing over the past decade or two.

Saturday afternoon I drove to Laurel, MD, to do a talk and book-signing at the Crystal Fox—the biggest magickal store I’ve yet visited. After the gig I returned to Burt & Stephanie’s to join their Heathen Sumbel with 14-15 folks. This consisted of several hours passing around a horn of mead and raising toasts to everything we could think of, followed by “Hail!”eathen Sumbel 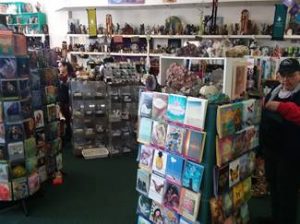 The next day (Sunday) we got up a little expedition to the Smithsonian National Museum of Natural History in DC with Burt, Stephanie, Perris, Tani, Hal and Joe. The Metro let us out right in front of the Trump Hotel, so we had to get pics… Sadly, my favorite section, fossils, was closed for renovation. But there was plenty else to see. Worn out from a full day of walking through the many excellent exhibits, we adjourned for Thai dinner at a restaurant called Thaiphoon. 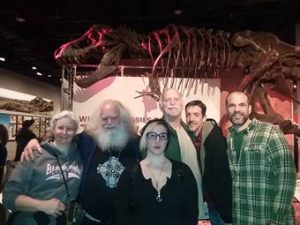 After dinner I drove about an hour to Brandywine, to visit for a few days with Nicolo & Joanne Whimsey at their Imagineacres Farm. Nicolo and I had met in 1982 at the Maryland Renaissance Festival when I was touring Ren Faires with Lancelot, the Living Unicorn. He and my dear consort Dona (who I met at the Texas Ren Faire that same year) are old friends, and it was she who connected us back together. Now retired from the Faire circuit to pursue teaching, Nicolo and Joanne are long-time performers in juggling, Shakespeare, and animal acts, and they have two very sweet donkeys (Sophie and Rosa) and a beautiful horse on their 125-acre farm. Yesterday we spent some time with the equines, and took a nice hike through the farm and canyon, looking at waterfalls and fossils (brachiopods). We were joined by the Simpsons (Rick & Monica), and as seems to be the usual case, we stayed up late sharing stories and laughter. 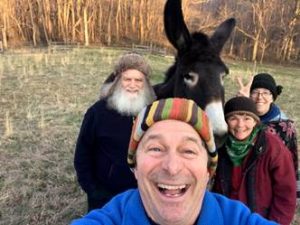 Later this afternoon I have a phone interview with Dan on Brattleboro Community Radio-WVEW-LPfm. I’ll post a link where you can hear it… Then this evening a few more friends are coming over for a cacao (chocolate) ceremony. One of these will be Jeanné Berger, one of the great loves of my life, who I also met at the MD Ren Rest in 1982. We haven’t seen each other since we traveled together to Alaska sometime around the early ‘90s. I am so looking forward to seeing her again!

Tomorrow (Wed.) I’m going to visit Tamara in Waldorf, MD, which is only 10 minutes from here. When she was a little girl, Tamara lived with her mother, Ayesha, and Gwydion Pendderwen, on CAW’s 55-acre sanctuary of Annwfn on Greenfield Ranch in Mendocino County, CA. Gwydion died in a car wreck at Samhain of 1982 (that was quite a year!) – on Tamara’s birthday. Over all these years since, she’s gone off to have a full life, and it’ll be great to meet her family and catch up.

Thursday I’ll be back here at Imagineacres, where Nicolo has gotten tickets for a play in the evening called “Confection,” by Zack Morris. As I understand, it’s an immersive experience, like dinner theatre. Sounds like fun!

Friday I’ll be leaving lovely Imagineacres and driving down to Richmond, VA, were I’ll be staying with Michele Vogt. On Saturday, we’ll be conducting the Ostara ceremony at the First Unitarian Universalist Church of Richmond, with Michelle as HPs, and I serving as HP.