Gypsy and I joined Jerrie Hildebrandt and her extended family for a lovely
Thanksgiving dinner and conversation late into the night. Jerrie is
President of CUUPS (Covenant of Unitarian Universalist Pagans), and an
Ambassador to the Parliament. Since we’d attended the Parliament together,
we had a lot to talk about. She’s also been working with Gypsy in developing
promotional materials for the Cosmic Connection.

Saturday has to have been the best birthday party I’ve ever had! Music, art,
fire-spinning, dancing, drumming, food, and a giant birthday cake to share
with everyone! The event was held at the Cameron Real Estate office in
Salem, and hosted by owner Barbara King and agent Francine Braese. Such
sweethearts! 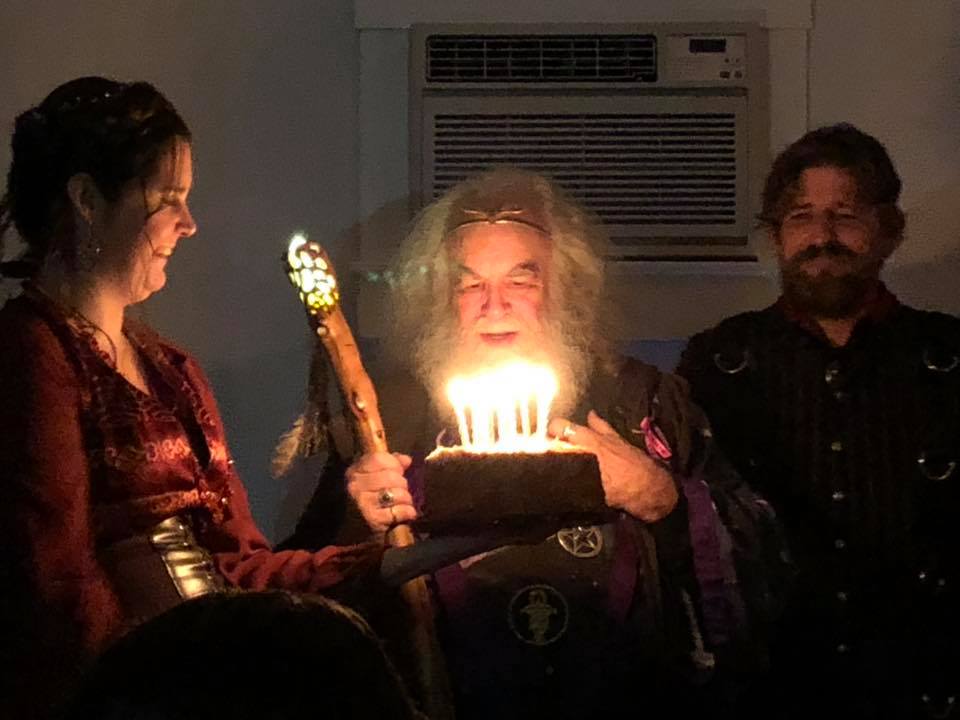 I cast the circle with my lighted staff. Jimmy Clark, Francine, and Gypsy
Jay performed with Jimmy’s band, JC Music & Wellness (with drummer Erich
Christopher Terry). Gypsy Ravish and Katrin Chapman sang together. Simon
Deacon invoked the spirit of Merlin for a Vortex Healing. Jimmy showed the
fabulous pre-release music video of “The Hermit” Tarot Trump that we all
filmed back in Pennsylvania on Oct. 5. The song is “Bringer of the Light,”
with me as The Hermit. Erich and Gypsy Jay did a bit of Sideshow performance
(Erich driving a nail into his nostril; Jay doing a straightjacket escape
and having money stapled to his bare body). Jay also did a mini fire show
that was quite impressive! Several people brought drums for a great drum and
dance circle. And <https://www.facebook.com/moonlitface> Danielle Tracey
set up her easel and painted this beautiful piece of cosmic art while we
watched, then gave it to me. See more of her surreal spiritual art at
Seizethebeauty: https://twitter.com/seizethebeauty.

Francine presented me with a small carrot cake (my favorite) with 76 candles
(no, not quite!) that I blew out with a wish.

Sunday morning Gypsy and I did three “Cosmic Encounters” for groups of
organizers and friends from the party the night before. We’d been working on
the whole presentation and script for awhile, and this was our first full
run-through with live Guinea pigs. Everyone loved it, and no one wanted to
leave. The experience was planned for 23 minutes (hail Eris!), and we were
right on target. I love it when a plan comes together! Now we need to add
music and a slide show, and put out the promotional materials to make this a
destination for magickal pilgrimages.

On Monday Gypsy and I drove up to her friend Lady’s 1840 Colonial house in
Maine for another wonderful Thanksgiving with more family and friends. There
was snow on the ground. my first snow of the year. Brr!

Sorry not to have written another entry since getting back from the Parliament. I’m getting back to normal life here in Salem. The biggest news is that my friends Jimmy Clark & Francine Braese have been putting together an extravaganza party for me here in Salem, for only a week from today! These are the wonderful folks who already put on a couple of successful fundraising events in PA before I came to Salem. On Oct 5, we did an all-day filming session at the labyrinthine country home of my old friend David Donohue, for Jimmy’s Tarot music videos of “The Emperor” (David) and “The Hermit” (me). After the last scenes were in the can, we were treated to an awesome theatrical fire performance by Gypsy Jay.

Jimmy, Francine, and Gypsy Jay will be performing again, with Jimmy’s band, JC Music & Wellness (with drummer Erich Christopher Terry) at my “Birthday Bash & Benefit,” Nov. 24. See the Facebook event for details and registration info. Other performers will include:

Gypsy and I have been so busy catching up from the Parliament, and running the store, that we decided last night that we needed a little break. So we went out to dinner at the Thai Place, and then went to see the new Disney movie, “The Nutcracker and the Four Realms.” Starring Keira Knightly, Mackenzie Foy, Helen Mirren and Morgan Freeman, it was a gloriously stunning visual and musical masterpiece, and even included some significant ballet scenes. Next we want to see the new Harry Potter movie…

We’re also working on the project that Gypsy brought me out here for: opening the Cosmic Connection Temple of Stars – a Witches’ Planetarium. This amazing chamber was conceived and created by Gypsy’s late husband, Richard (Master Azaradel). We are developing an experiential “star walk” and “Mystick Crystal Activation” for visitors coming here on a magickal pilgrimage. Our first prototype tour will be tomorrow, for a bunch of friends who showed up today who are part of my own magickal training lineage with the late Deborah Bourbon, of Pathways in St. Louis.

“Not all who wander are lost.”
–J.R.R. Tolkien, The Fellowship of the Ring

In my 76th year of this incarnation, with everything I own placed into storage, I decided to go on an indefinite Walkabout. My Mission is to travel around the country making personal visits with old and new friends and lovers, interspersed with book-signings and talks at Pagan stores and gatherings. Previously, people who wanted to meet me had to come to me. Now I’m coming to you! (or at least to a Pagan venue in your neighborhood).

I hit the road on June 15 of 2018. After many adventures in California, Reno, Las Vegas, Austin, Guatemala, Salt Lake City, Omaha, Kansas City, St Louis, Cincinnati, numerous places in Pennsylvania, and NYC, I arrived in Salem, MA on Oct. 10, in time for Samhain. I attended the Parliament of the World’s Religions in Toronto the first week in Nov., and I’ll be based in Salem through the winter, working to open the Cosmic Connection Temple of Stars, before heading off on the eastern and southern part of my journey (including several big Pagan festivals) in the Spring.

I am being supported on this Walkabout by appearances, fundraising events, and generous donations, particularly via my Patreon page: https://www.patreon.com/oberonzell.

Another full and wonderful day at the Parliament. The highlight for us, however, was getting to spend over an hour and a half with Margaret Atwood, author of “The Handmaid’s Tale,” sitting in front of a nice fire in the drawing room of the historic Campbell House in downtown Toronto. We found so much to talk about! The entire meeting and conversation was filmed for a documentary on Margaret that is intended for release next October or so. Margaret’s husband Graeme Gibson and Gypsy joined us for part of the conversation, and Margaret gave me a pre-publication proof copy of her latest book, Hag-Seed, a modern adaptation of “The Tempest.” I can’t wait to read it! Then we all went back to the Convention Center for Margaret’s talk on “Climate Change and Women.” Lucy Cummings, who introduced her onstage and conducted the Q&A, referred to her as a “national treasure” of Canada.

This is the 5th day of the Parliament of the World’s Religions in Toronto. Gypsy and I are having an amazing time! Connecting to so many people; fantastic workshops and panels, but even more significant are the conversations we get into with folks sitting around in the little conversation areas scattered throughout the convention center.

Since I’m wearing my Pagan and Wizardry ritual regalia, I attract a fair amount of attention. People want to know what religion I am, and when I tell them I’m a Pagan, they’re generally quite interested in learning more. Likewise, when Gypsy tells them she’s a Witch High Priesstess, Many already have a pretty good idea of what Paganism is–a food vendor outside the hall even said, “Oh, the Old Religion!”

Laney Goodman and her Mother Drum presentation invited Gypsy up onstage to sing with them–invoking the Four Elements, engaging all to drum and chant, blessing Mother Earth and the work of the Parliament. Their company included Imani, ALisa Starkweather, Kathleen Rouleau and others.

Much of the programming has to do with dealing with global climate change. But there are a lot of programs about women in religious leadership, including a panel on Priestesses, with Selena Fox, Dierdre Pulgram-Arthen, Angie Buchanon, Inija (Romuva HPs from Lithuania) and other Pagan Priestesses. Dierdre even gave a presentation on the main stage of the Plenary, where many individual religious leaders made short speeches.

There was also a gratifying amount of talk about the Goddess–particularly Mother Earth. Various indigenous American tribes were represented in a continuing series of talks by Elders in the large constructed Longhouse and tipis, and they were all about Mother Earth, Mother Nature, etc. All were extremely concerned, sharing warnings about the dire fates of the 4-legged, 2-leggeds, and their ancestral lands, urging us to act now to stop the tides of destruction that threaten all life.

At one presentation by indigenous people on prophecies of this time, I got to make a statement that in my travels throughout the world, I’ve spoken to indigenous shamans and elders of Australia, Peru, Guatemala, Hawaii, Siberia, North America, Nigeria, etc. And from all these conversations, a single word has emerged that I felt commissioned to bring here: “Awakening.” This is the Time of the Awakening. And all agreed enthusiastically.

Yesterday Belladonna Laveau of ATC (Aquarian Tabernacle Church), Andras Corban-Arthen of EarthSpirit and I had lunch together, and Andras and I had a pretty fierce argument over the capitalization of the name of our religion–Pagan. He refuses to capitalize it, insisting that Paganism isn’t really a religion, but merely a category of religions, like animism, monotheism, etc. I, however, maintain that several million of us identify our religion as “Pagan,” and to not capitalize it is a grievous insult. We’re not done with this…

At 4:30 in the afternoon, we had a “flash mob” spiral dance, chanting “Isis, Astarte, Diana, Hecate, Demeter, Kali, Inanna.” The spiral opened into a snake dance proceeding up and down escalators, throughout both convention halls, and we were joined by many others, including Sikhs, Hindus, Buddhists, etc.

Last night Belladona and her ATC crowd took us back to their B&B for a fantastic home-cooked dinner and conversation that is going to have significant results down the line…stay tuned!

Today Gypsy and I will be meeting with Margaret Atwood, author of “The Handmaid’s Tale,” and the meeting will be filmed by a company that’s doing a documentary on her.