“Too much of a good thing” is how Aldous Huxley described Lake Atitlan in his 1934 travel work called Beyond the Mexique Bay.

Yesterday was another full day in Pana. Carolina joined us at breakfast in the Regis (included in our stay), and we soaked for awhile in the hot tub before heading over to Joe’s place via tuctuc (little red golf-cart-like vehicles that seat three people cozily and serve as taxis everywhere we’ve been around the Lake). Right in back of his house, an enormous boulder the size of a step-van had rolled down the mountain like a titanic bowling ball and smashed through the neighboring house. It was still there, being impossible to move, and the house was pretty wrecked. Déjà vu! Do we detect a theme here? 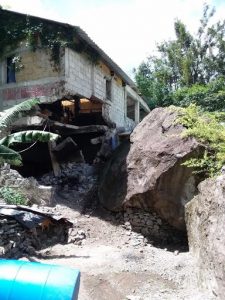 The boulder and the house it wrecked.

Joe’s studio/lab is a complex of electronics, computers, cables, monitors—and virtual reality equipment. It looks, in fact, like the setup in the van in the movie, Ready Player One. He hooked us up with helmets, goggles and control wands, one for each hand, and activated his holodeck, where we were able to choose from a couple dozen portals to enter incredibly detailed 3-D virtual worlds—such as outer space, the ocean depths, the Jurassic era (with dinosaurs!), the African Savannah, a Japanese fantasy landscape, and many others—complete with animated creatures. But that was only the background. Our hands and the controls we were holding them in were also visible in the virtual worlds, and with them we could grab, toss, and otherwise manipulate objects from a wide selection of options to engage ourselves in the various realms. This equipment is still in the early developmental stage, but it was easy to envision how it will evolve in the immediate future—as well as the further implications and possibilities over decades, centuries, and millennia… 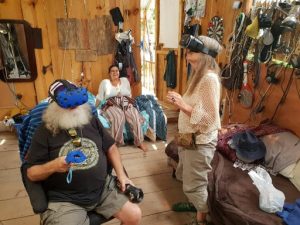 Joe’s lady Marybel joined us shortly before Carolina had to leave for a 2:00 workshop. Marybel owns a restaurant in San Marcos called Samsara. She’s getting ready to introduce a new dessert involving shaved ice made of frozen fruits, yogurt, etc., so she whipped up a batch for us to try. It was delicious, and should be a big hit. Joe Goerbert is one of the world’s top business planners; see www.brainhive.de. The blog holds information about the Guatemala project and volunteer program.

We had to catch the last boat back to Cerro de Oro at 5:30. Carolina had arranged for a tuctuc to meet us and take us back to the Lodge, and here we are. Today is a relaxing downtime. We took a little dip in the Lake, and I’m catching up on this journal.