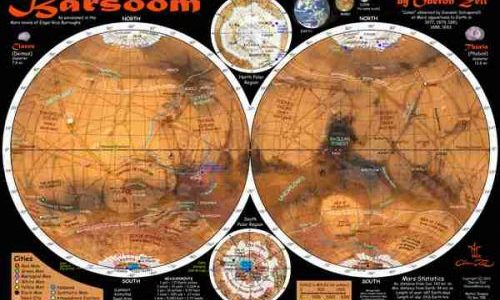 48 in stock (can be backordered)

Over one hundred years ago, in 1911, Edgar Rice Burroughs (the creator of Tarzan) introduced an astonished readership to the adventures of John Carter, a Civil War soldier who found himself transported to the planet Mars. Or, as the natives called it, Barsoom. The first novel was A Princess of Mars, and it was followed by ten more books over the next 30 years; plus countless comic books, and in 2012, a spectacular Disney movie, John Carter.

These were the first sci-fi adventure tales ever written that took place on another world, with alien races, civilizations, and creatures—and they preceded and inspired every subsequent extra-planetary series from Flash Gordon to Star Wars.

But despite locating the adventures of John Carter on the canal-covered Mars depicted by Victorian astronomers, Burroughs never provided a map showing the locations of his Barsoomian cities and other features. Over the past century, many fans have tried to compile such a map, but none have truly succeeded. Until now.

Painstakingly referencing clues in all eleven books, noted historian and cartographer Oberon Zell (Lost Civilizations & Secrets of the Past, New Page 2012) has created the definitive map of Burroughs’ Barsoom as a gorgeous 18”x24” full-color poster, accompanied by a 60-page color-illustrated booklet.

Order below for $12 (+ $4.99 shipping) for the map and booklet! (NOTE: You must provide an email address to receive the booklet, which will be emailed to you as a downloadable PDF.)